Once upon a time there was a beautiful bra set, made by hand from a very talented fairy in UK. One day the bra set was bought from an Austrian wannabe-up-and-coming fairy. Oh, the joy!

The future owner was already dreaming about their first encounter. The fairy packed up the bra set and, not thinking of any evil that could come of it, got it posted at Royal Mail. Perfectly addressed it started the journey to Linz, Austria.

The days went by. The days became weeks.

Until suddenly, one day, the wannabe fairy found out there was a horrible disaster dreading: The delivery status changed! The parcel was shipped from London, but evil forces evicted the parcel and sent it to - Australia.

The shock went all through her body up to her bones. Oh no, the poor bra set! All alone, in a distant country, without an owner! The fairy in UK was informed at once. There was crying, there was planning - was there a way to rescue the bra set?

Bravely the fairy went to war. A lot of phonecalls to Royal Mail later the sad message got through: Wait, wait, maybe faith will change.

The wannabe fairy was heartbroken. But one day, it was now months after the disappearance of the parcel, a small wonder happened. She opened the post box and found a black parcel, slightly worn from the journey, with a big sticker on it: MISSENT TO AUSTRALIA.

At once the parcel was opened, and lo! Her wishes were fulfilled! The bra set finally found its way to the new owner!

The fairy in UK was brought the good word and thanked again and again for her brave fights, it's only because of her that the wannabe fairy and her bra set can now live happily ever after. 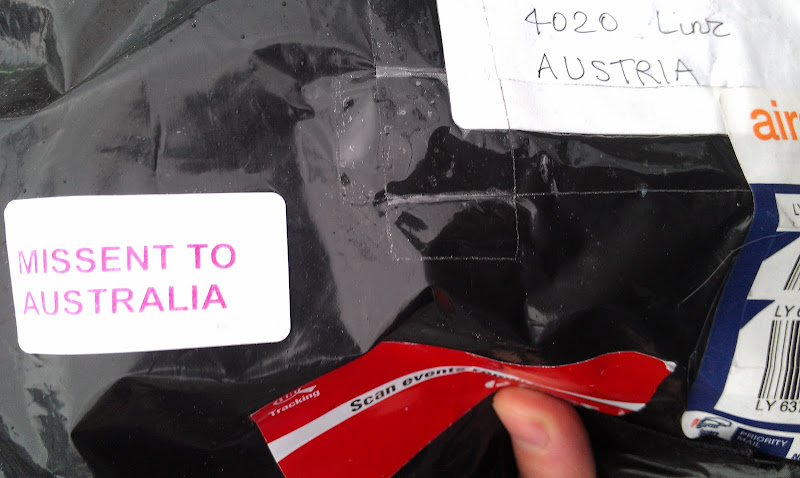 Finally a new review on the blog! But not just anything - no I proudly present my new favourite piece of my wardrobe: A bra set by Karolina Laskowska!

When Karolina had her sample sale on facebook last autumn I did some budget calculating and ended up buying a black panty (10GBP) and a creme silk/mesh bra set (60GBP).

Those who are following me on social media might have been updated on all the drama with this bra set - they first sent the parcel to Australia. Mhm. Austria, Australia, tooootally the same. Kangaroos in the snow and stuff. Some months later I finally received it! (What's really tragic is that this is actually the second time this happened...)

It's a sample piece, so it's not "up to her usual standards". BUT - I'm still, or even more, in love with this! The quality is really nice :) The set has got a 32C silk bra with eyelash lace. It's a demi cup bra, but on me it's more like... 1/3 cup (hence no pictures) with additional straps and silk bows plus a pantie in UK 10/17, made from silk and mesh with a large silk bow to fasten in the back.

The Demi Cup bra is lightly padded and made from very soft creme silk. There is added white eyelash lace to the cups and the band is made from stretching tulle. Additionally to the usual straps there's a second pair of straps to be closed in the neck (very much like a racer back) and a soft big silk bow you can bind loosely around your neck. 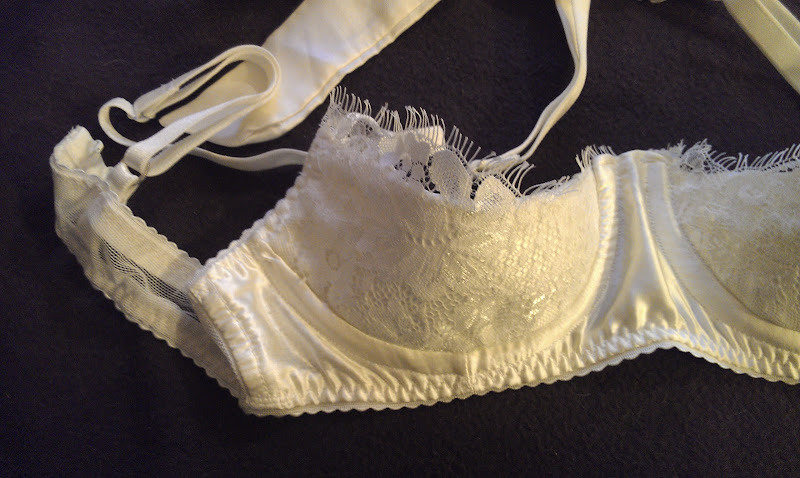 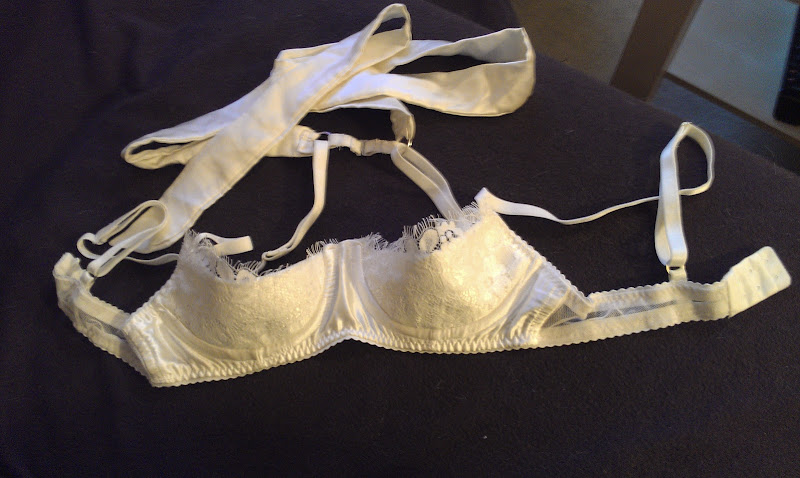 The 32 band is nice and snug on me (72cm/68cm Underbust) and the wires are wide enough for me.

For a nice fit I need wide wires and rather shallow cups, this bra provides both and gives you a wonderful comfortable and highly luxurious feeling. And support! 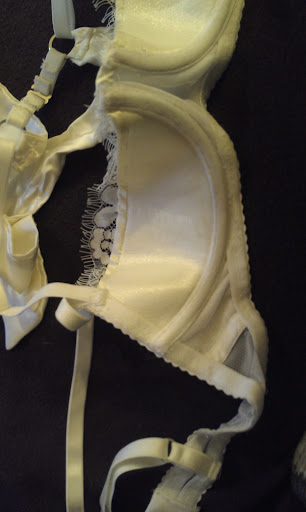 I really love wearing the bra underneath a smooth and simple shirt or pullover and have the silk bow do all the necklace work!

I'm especially happy that the bra is so comfortable and the demi cup doesn't give any weird shapes under a shirt, so I can actually wear it not on special occasions only! 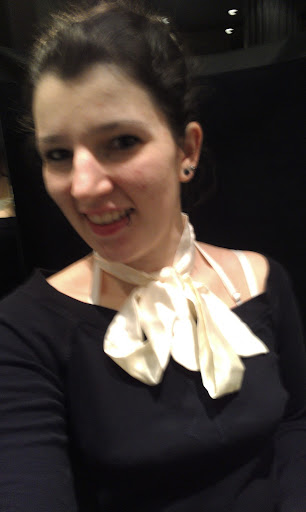 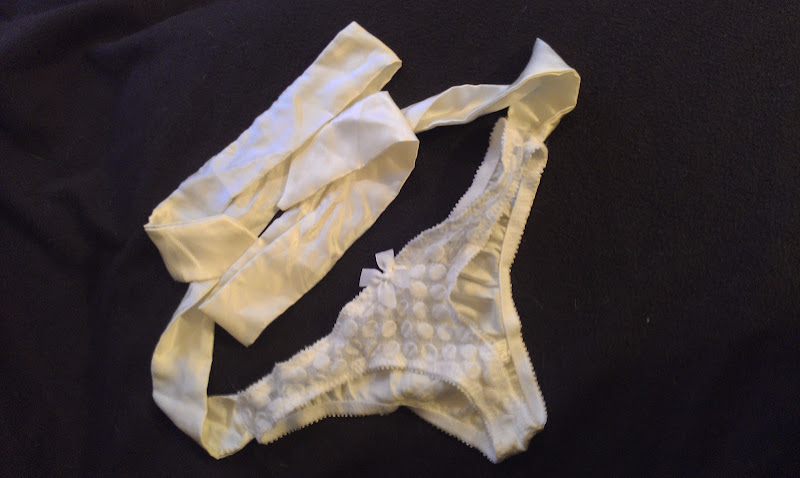 Unfortunately there's no way this panty will fit me. It's still in my wardrobe, never worn. I'm torn between selling it to another loving body or maybe (and I would have to ask Karolina's permission to do so because it kind of feels so wrong!!!) alter the knickers to fit my booty. 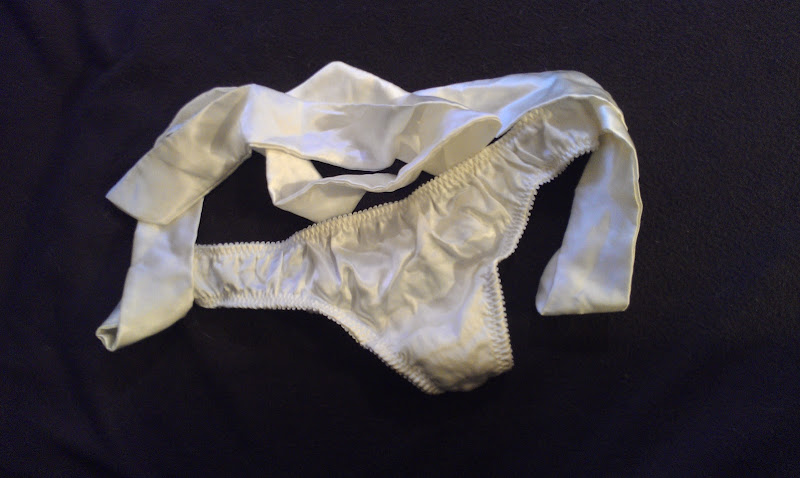 Conclusio: If I'm this stunned with the quality of a sample piece I'll be in love with her full collections. So I'll definitely keep an eye on Karolina Laskowska's carriere!